To say Diana Beltran Herrera’s hands are super-precise instruments would be an understatement. The talented artist uses her innate dexterity and years of practice to create amazingly-detailed models of various birds, from the common sparrow to tropical parrots, out of bits of glued paper. To represent the birds as they are in nature, Herrera makes her sculptures life-size. Over the last decade, she has created paper sculptures of hundreds of bird species. 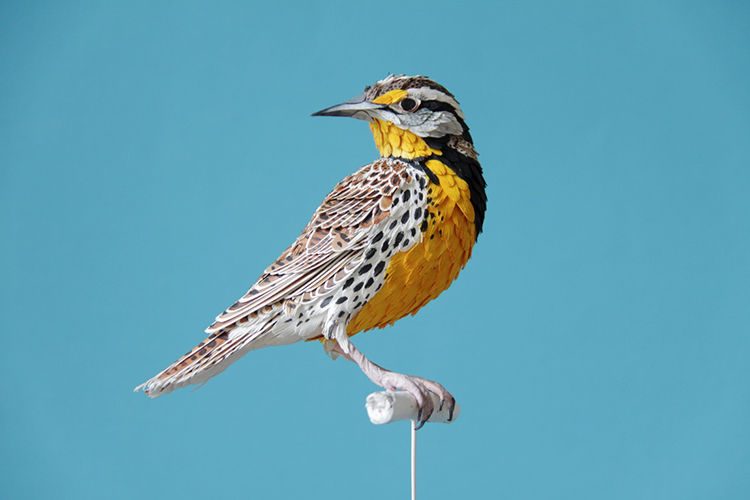 “I really got to ‘know’ the birds: I collected a lot of photos and I studied them in books,” Beltran Herrera told Flow Magazine about the artistic process. “I made an archive with different views, colors and special information. To make them, I first choose a profile and draw them — the wings, the feet, the face — in Illustrator. My work is half digital, half handmade. I print everything and cut it before I put it together. It takes me at least four days to make one bird.”

The Colombian artist said that her beautiful art form began with a return to nature a few years back, and a desire to know more about the things living around her. She knew that there were other creatures sharing this world, but she wanted to know more about them, and she began with birds. She observed local birds in her city of Bogotá, researched them online, and met with members of an ornithology group to learn more about them.

Inspired by all this new knowledge, Diana started making paper sculpture of birds, and in a few years time she had created a paper aviary featuring over 100 species of birds, from blue jays and cardinals, to flamingos and blue herons.

“I only use paper, and some wire for the feet,” the artist said. “I paint them myself; I add watercolor to the paper to get the tone I need. I use very basic, daily materials and transform them into something that has more value. With my work I want to show people that you can make great things with the simplest material you can find: paper. You only need time and imagination.”

Diana Beltran Herrera makes the process sound simpler than it is, though. She may only use paper and some wire, but the work and attention that goes into each model is immense. She begins with a base form made out of paper, on which she carefully glues  meticulously cut paper feathers. Then comes the coloring, which has to be incredibly precise to depict the birds as closely as they are found in the wild.

“My work is nothing different or new, it is just a representation of something that is real, and somehow it has an impact,” Beltran Herrera told Smithsonian Magazine. “More than creating birds, the real aim of what I do is to use this work as a model to exercise a behavior. It is an invitation to rediscover what is there, to see further and understand we are not alone here. We are part of a big system, and, as that, we need to learn how to respect and relate.”

For more incredibly realistic paper bird sculptures, check out Diana Beltran Herrera’s official website, as well as her Instagram. You won’t regret it!