The town of Ingham, in Northern Queesnland, has reached “crisis point” after hundreds of thousands of fruit bats invaded the place last month. Things have gotten so bad that kids are afraid to go to school anymore, and rescue helicopters can’t land at the local hospital.

Flying foxes, also known as fruit bats currently outnumber humans in Ingham by hundreds of thousands. And they’re not the only bat species that decided to make the Australian town their home over the last month. According to local sources, people here have been invaded by four different species of bats, each of which mates at different times, making it really hard for authorities to intervene. To make matters worse, the bats are protected by law, so locals can’t take matters into their own hands either. 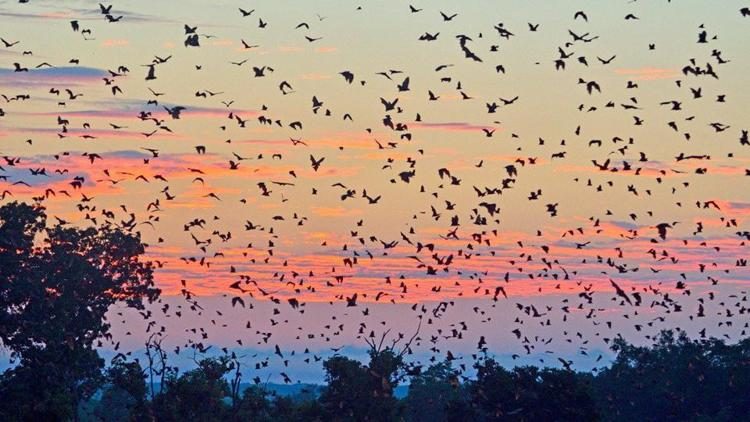 “It just seems to me that every bat in Australia is now in Ingham,” Raymon Jayo, Mayor of Hinchinbrook Council, told A Current Affair. “There’s four different species and because they all have young at different times, there’s hardly a window of opportunity when we can interact with these bats to try and move them on.”

The bat population in Ingham has swollen to an estimated 300,000 in recent weeks, far outnumbering the human population, and they don’t seem eager to move on any time soon. “Bat tornadoes” have become common around town, and so fave fallen trees tore down by the sheer weight of the animals hanging by their branches.

“They’ve totally destroyed their existing roost so they’re looking for new country,” Mayor Jayo told ABC News. Where they want to go is basically beside all our critical areas — that includes the schools, the hospital, our kindergartens, our preschools. It’s beyond a nuisance — the town is at fever pitch.”

Many children at Ingham State School are reportedly too scared to go to classes, as a massive colony of bats has made the school grounds their home. Bats are known to carry serious diseases that can be passed on to humans through scratches and bites, and some kids obviously don’t want to take any risks.

Unfortunately, there isn’t a lot authorities can do, as bats are notoriously difficult to disperse, especially in such large numbers. All anyone can do is sit tight and wait for most of the bats to leave, which some experts estimate will happen in April.

While most of the locals complain about the bat invasion, comparing it with a biblical plague, animal experts warn that bats play a vital role in maintaining the natural balance, and that we as a species would be much worse off without them.

“The importance of these animals is completely underrated — without these creatures out there pollinating and creating new life, we may as well pack up and walk away from our ecology,” Amanda Wright from North Queensland Wildlife Care said.

A couple of years ago, we wrote about another bat plague in Australia, one that involved thousands of the flying rodents dropping dead around the city of Cairns due to the heatwave.