Maverick Francisco Oyao, a student taking up Bachelor of Culture and Arts Education at Western Mindanao State University in the Philippines, recently made news headlines around the world after surprising his sister with a one-of-a-kind prom dress that he made by hand.

It all started earlier this month, when the Culture and Arts Education student from Zamboanga City learned that his sister, Lu Asey Keanna Oyao, wanted to attend the upcoming Junior and Senior Prom in February. Unfortunately, renting a dress suitable for such an event was very expensive, and their parents simply couldn’t afford it. Keanna was worried that she didn’t have enough money to afford a proper prom dress, but since she was in her final year of junior high-school, she still insisted on going. Determined to make his sister’s prom a memorable one, Maverick decided to make her a unique princess dress himself. 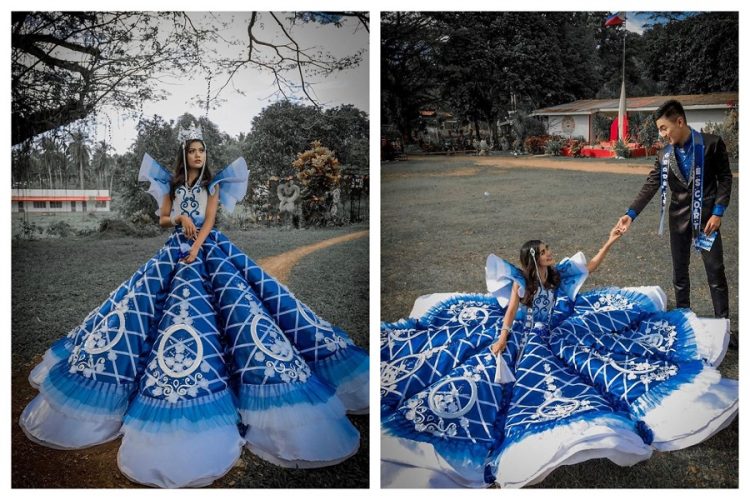 The problem was that Maverick had no experience making dresses, but despite worrying about being able to complete the monumental task, he started watching YouTube tutorials and eventually decided that his sister’s happiness was worth the effort. He started looking at Spring and Summer collections as inspiration for Keanna’s dress design, and later admitted that the creations of renowned Filipino designer Michael Cinco influenced him the most.

Despite lacking any dress-making experience, Maverick Francisco Oyao managed to turn the pencil-drawn design he set on paper into a reality, and it only took him about a week and a half to do it. The fairytale blue dress he made for his tenth-grade sister fit her beautifully, and even though she didn’t win the Best Dress award at prom, it definitely attracted a lot of attention.

And when Maverick posted pictures of the making-of process as well as the finished dress, along with the story of how it came to be, it went viral online, first in the Philippines, and then all over the world.

“A day I will never forget. I even cried with joy because the sleepless nights and exhaustion paid off when I saw how happy my sister was and the outcome was great even if I did not use expensive materials for the gown,” Oyao wrote on Facebook. He only spent three thousand pesos ($60) on the dress, much of which were donated to him by friends.

“To those who helped us financially just to finish this on time thank you so much. You know who you are,” the talented student wrote.

Lu Asey Keanna’s prom was on Valentine’s Day, but photos of her wearing the dress are still doing the rounds online, and for many it has become a modern symbol of brotherly love.